If in doubt, ask.
This page describes the current firmware version, which is 1.1.0

Connection to an iOS device requires the Camera Connection Kit (30 pin or Lightning version as appropriate for your device).

No driver is required for macOS or iOS.

Use with Windows requires installation of a driver. Please download the relevant version from the downloads page. Double-click the installer to run it, and follow the prompts to install the driver.

The power connector is Doepfer standard. If using the power cable supplied with the ES-8, the connector is keyed and will only insert into the ES-8 the correct way round, in which case the red edge of the cable is nearest the edge of the PCB, and carries -12V. Be sure to connect the other end of the power cable correctly, again so -12V corresponds to the red stripe on the cable. 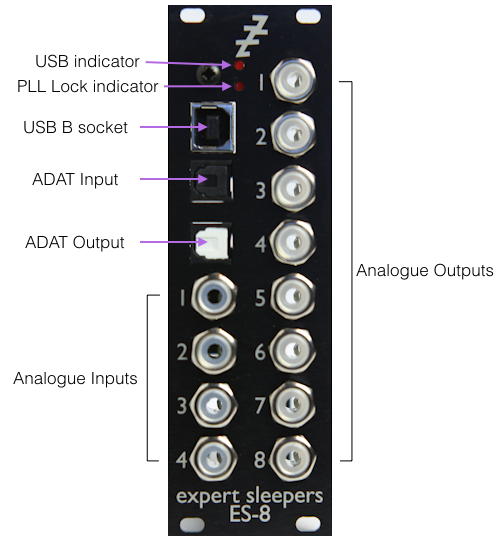 There are two LEDs on the front panel:

By default the ES-8 runs off its own internal clock source. The sample rate (44.1/48/88.2/96kHz) is normally selected in your DAW application.

You can also change the ES-8's settings via the Audio MIDI Setup utility in macOS, or the Expert Sleepers Control Panel (installed with the driver) in Windows. 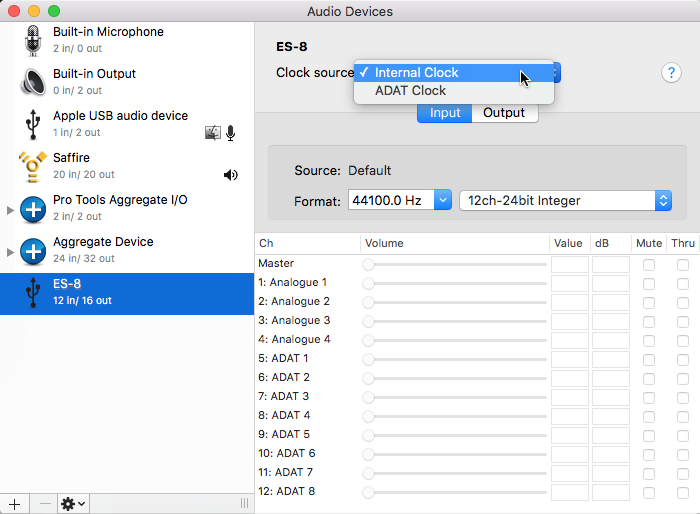 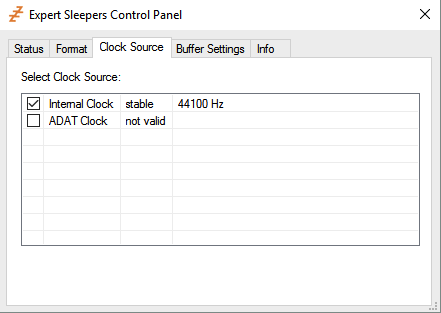 If an ADAT signal is connected to the ES-8's ADAT input, you can select 'ADAT Clock' as the clock source, in which case the ES-8 will automatically lock its clock to that of the incoming ADAT signal. 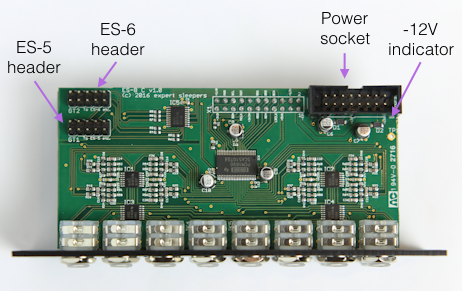 Connection to ES-5 and ES-6 modules is exactly as described in their respective user manuals (the manuals refer to the ES-3 as the base module, but the connections are the same). The user manuals are here (ES-5) and here (ES-6).

Note that there is a further socket at the top of the module, between the outermost circuit boards. This is a programming/debug heaader and is not for end-user use. Do not plug anything into here.

Without a USB connection, the ES-8 operates in 'standalone' mode. In this mode

Since the ES-8 only has four analogue inputs, the last four ADAT output channels will be silent.

The ES-8 will sync to the incoming ADAT clock, if any. With no ADAT input, it will use its internal clock, in which case anything using the ES-8's ADAT output will need to sync to the ADAT clock.

The ADAT protocol intrinsically only supports operation at 44.1 or 48kHz. Most audio interfaces that run at double sample rates (88.1/96kHz) use two ADAT ports and a variant of ADAT known as 'SMUX' to support this.

The ES-8 takes a different approach. At 88.1/96kHz, every other audio sample on the ADAT outputs is thrown away, reducing the signal to 44.1/48khz. Thus, the full channel count on an attached ES-3 (for example) is maintained even at 96kHz. Similarly, every audio sample arriving on the ADAT input is doubled up.

This basic sample rate conversation is likely to be fine if the signals are CVs. For audio, you might want to consider adding some filtering into the signal chain to avoid aliasing.

Note that the above only applies if the ES-8 is running at 88.1 or 96kHz. At 44.1/48kHz, everything is running at its natural rate, nothing is thrown away or fabricated, and there are no odd aliasing concerns.

Also, for the avoidance of doubt, if the ES-8 is running at 88.1/96kHz then its own analogue inputs and outputs are running at that rate.

The ES-8's current firmware version can be viewed in the macOS System Information utility, or in the Expert Sleepers Control Panel (installed with the driver) in Windows: 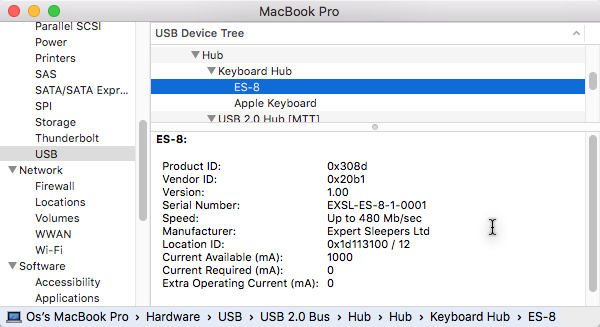 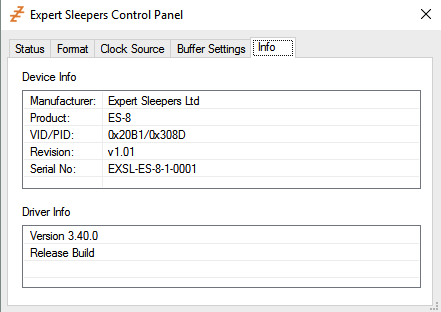 Firmware updates are provided in the form of an updater application, which can also revert the ES-8 to its factory-installed firmware.

The update process is as follows.

To revert to the factory installed firmware, the process is the same, except you click on the 'Revert to factory version' button and on completion the message is 'Revert complete'.