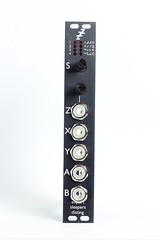 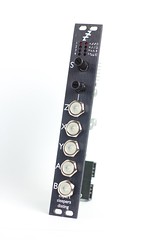 The Disting is a 16-in-1 multifunction module, offering a variety of CV and audio processes, including a selection of oscillators (LFOs/VCOs). All algorithms have two high-precision inputs and outputs, and a third control input, exposed on a front panel knob and a CV input.

The included algorithms are:

The video below was the winning entry in a video competition we held to promote the disting. It's a fun and very musical romp through all 16 of the disting's functions.

The Disting's specifications are as follows:

The front panel is drilled for both Doepfer and Analogue Systems mounting holes (using a 'slot' rather than a single round hole). The power connector is a Doepfer standard 10 way IDC, with -12V furthest from the top of the board.

From May 2015, the disting has been updated to a 'mk2' version. Compared to an original ('mk1') disting, the only change is an increase in the maximum delay time of the Clockable Delay/Echo mode - more than doubled to over 1.6 seconds.

The Disting is based around a PIC microcontroller, with a programming/debug header available on the board. Using Microchip's free development tools a user can easily hack the Disting to perform their own functions.

We have provided an open source code framework into which developers can slot their own algorithms. This can be found here. There is a thread about disting firmware hacking on the forum here.

Below is a (rather long) video introducing the disting in some detail, filmed at a meeting of the London Music Hackspace. You may like to jump in at these times: