We're delighted to announce that a plug-in is now available for VCV Rack to allow direct use of the ES-40, ES-5, ESX-8GT and ESX-8CV from within Rack itself.

The plug-in can be downloaded from the Rack plug-in manager in the usual way. It's free (as in beer).

We're happy to announce the release of an updated version of the ESX-8CV, the ESX-8CV mk2.

Functionally equivalent to the original ESX-8CV, the mk2 adds illuminated jack sockets, has reduced power consumption, and matches the look of the ES-8 and the other recent module updates. 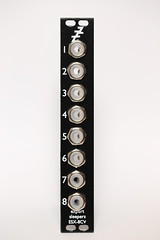 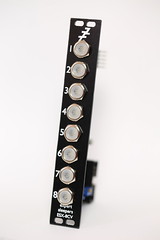 * The ES-40 SPDIF Interface (£94.80) converts a standard S/PDIF input to five channels of expansion headers, which are used in conjunction with the Expert Sleepers ESX range of expanders.

All are available immediately.

We’ve also announced the forthcoming ESX-8MD MIDI/DINsync Expander, expected to be available in the next couple of months.