While we will not ourselves be at NAMM this year, our modules will be there.

The ES-8 will be visible on the Bitwig stand (booth #10706), being used to demonstrate DAW interaction with modular systems.

The disting mk4 and General CV will be in the Mordax Systems rack (booth #10702), joining in with the fun.

Firstly, a new firmware release scheduled for just after NAMM will allow the ES-8 to work in 'standalone' mode, that is, without a USB connection. In this mode, the ES-8 functions as an ADAT-to-audio converter, much like a combination of the ES-3 and ES-6 modules.

Secondly, we're glad to announce that Windows drivers for the ES-8 will (at last) be available in February 2017, allowing users of Windows 7, 8 & 10 to utilise the ES-8 for the first time.

(Update - these are now available. See the ES-8 page for details.)

All have been updated with self-illuminated jack sockets (as seen on the disting and ES-8), and are in general less deep. Otherwise functionality, and price, remains the same as the previous versions.

All are expected to be available February 2017. 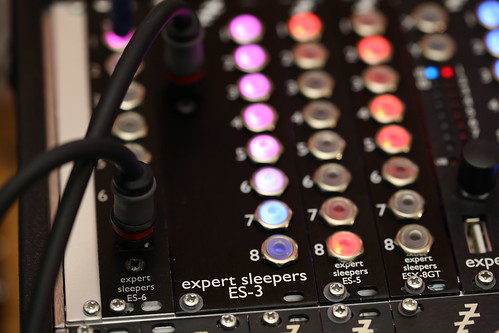 At NAMM ’16 we’ll be showing the new firmware v3.2 for the disting mk3 module, to be released immediately after the show.

The release will be announced on the forum thread here. Come and see the new features for yourself at Booth #5000.

At NAMM ’16 we’ll be showing the new firmware v1.5 for the FH-1 USB MIDI host module, to be released immediately after the show.

New features include
- new glide and gate length parameters for the built-in sequencers.
- portamento support for the MIDI/CV converters.
- per-device support in configuration scripts, allowing different configurations to be selected automatically when different MIDI devices are connected.
- front panel settings can be changed and menu actions can be performed via MIDI.

The release will be announced on the forum thread here. Come and see the new features for yourself at Booth #5000.

Expert Sleepers are going to NAMM! We’ll be part of the Muffwiggler booth, Booth# 1371 (Hall E), next to Pittsburgh Modular and Make Noise, amongst others. 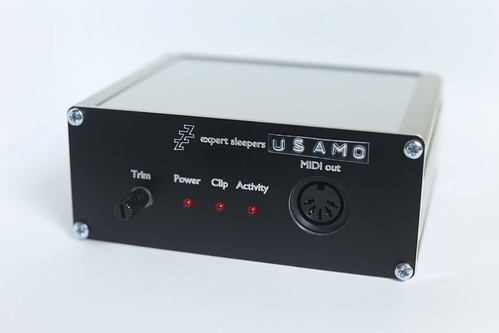 The MIDI signal is generated by the USAMO software, a plug-in which runs as a virtual instrument (AU/VST/AAX, Mac & Windows), as audio in your DAW. The DAW sends MIDI to the plug-in; the plug-in translates that to audio and sends it to the USAMO hardware, via an output on your computer's audio interface. The USAMO then reconstructs the MIDI and outputs it on a standard 5 pin DIN MIDI socket.

Because the MIDI signals are generated and transported as audio, they are guaranteed to be sample-accurately synced with your audio, and free of the jitter often associated with computer-generated MIDI.

The USAMO will launch at NAMM in January 2015.