Videos from the ES-9 launch event

Version 1.4 of the General CV firmware is now released. This adds a new 'Programmable' mode, allowing the use of the General CV as a general purpose CV-to-MIDI converter (in conjunction with the MIDI Breakout).

Down To The Wire presentation

On 11th April 2018, Os of Expert Sleepers travelled down to Elevator Sound (Bristol) to give a presentation, which is now available to watch online.

Version 1.3 of the General CV firmware is now released. This adds two new modes, 'Granular' and 'Shepard/Risset', and a variety of useful enhancements.

Version 1.2 of the General CV firmware is now released. This adds a new mode, 'Additive', and some important enhancements, notably the ability to remap CV inputs to your own choice of parameters, and to redefine the effect of the Mod Wheel.

The new General CV module will officially launch at Synthfest UK on October 7th. Our retail partner Rubadub will have the first few units available for sale on the day. Come along and check it out! 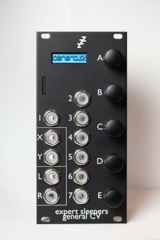 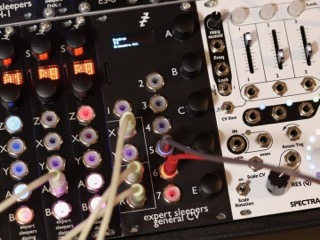 "For too long, Eurorack users have been denied important sounds such as 'Voice Oohs', 'Orchestra Hit' and 'Shakuhachi'," says Expert Sleepers founder Andrew Ostler. "We're delighted to finally bring these classic tones under CV control where they belong."

The General CV will show at the Superbooth show, Berlin, in April 2017.